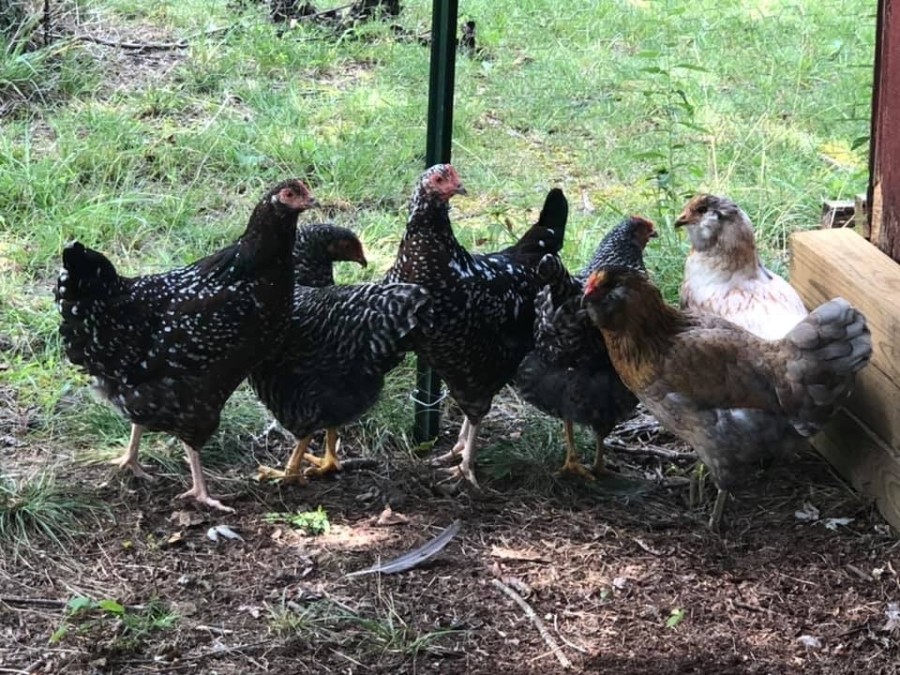 It’s easy enough to talk about the pandemic, about having to self-isolate or for those of us termed as “essential”, navigating our way through other people who are pridefully not following the social distancing rules. I think we’ve heard enough, read enough about these daily occurrences and since we are all living it, I’d rather not add more of the same. Instead, I would like to write about a few things that make me happy, the things that give me joy.

We love our pets! We have Talulah (Lulah), our puppy, who we can’t decide what actual breed she is. We know she is likely a boxer mix of some kind. She sleeps most of the day, but has energy like crazy. She loves to play and wrestle with anyone, including our cat, Bleuregard (Bleu). He is a somewhat crazy cat who is also a snuggle bunny. He loves a good cuddle and nap. He loves to play with Lulah and to spread his ultra fine gray hair into the atmosphere. He has the cutest gray nose!

Bleu is lately distracted by the brood of 6 chicks we picked up from Tractor supply. We got three Golden Comets (sounds like a quidditch broom right?!) and three Isa Browns. They are cute little balls of fluff, but they are also really feisty, almost matching Bleu in attitude. We haven’t named them yet, but we are thinking of perhaps veggie names. Michelle already named one Chili, because she is spicy.

We had six chickens outside which we got as chicks last year. Sadly, though we built their fencing as best we could, a fox found its way in through a space underneath a section and took one of our speckled sussex hens, her name was Lily. Now we are down to five chickens, a speckled sussex named Apples. Then we have the two easter eggers who are nothing but personality and fluffy necks, Bunny & Summer. We have two dominiques, Bernie & Clarice who we really thought would be characters really just punch the clock, do their jobs then punch out and call it a day. They give us eggs, but they are also our pets and we treat them as such. We give them pets and love, treats and they are spoiled rotten!

Our two cheese cats, Brie and Cheddar went with our son, Martin to his new place. Bleu was a holy terror on those two poor cats and Brie was having a breakdown. They are much happier now in their new place that they share with our son and son-in-law, Martin and Raven. We are looking forward to a time when this pandemic fades so we can visit them.

We are playing TWO D&D games now! We thought we would not play at all this year and suddenly our original game with Joe as DM is back on AND our friend Theo started up a forgotten realms campaign! With Joe’s game, I am playing a very curious halfling monk, Unamae and Michelle is playing a Ranger, Skye. Mari, Joe’s wife, is playing a fighter of unknown race, Connie who has memory loss (Skye named her after the coniferous forest we found her in). Keith (Butters) is playing Urmir, the oft-absent dwarven rogue.

The game consists of the aftermath of our previous high level campaign in which our characters became gods and battled the chained god. We don’t know how it ended, but these characters may learn through the campaign what happened, which is exciting. (And YES we totally stole all of our character portraits from the internet, none of us have the talent to draw people, fantasy or otherwise)

In Theo’s game, that started in Waterdeep, I am playing a tiefling shadow sorcerer named Trouble. Michelle is playing Zulae, an elven fighter noble. Joe is playing (yay he gets to play!) Servant a paladin of Mask, I believe he is an Aasimar but it hasn’t yet been discussed and he wears a black velvet mask all the time. Mari didn’t start the game with us, but she should be coming in with a half-elven rogue scout, who we haven’t met yet and so don’t know her name.

In this game, we are a small band of mostly thief-adjacent individuals, who are hired to smuggle a wagonload of potted flowers across the border as there is currently a total trade ban in place. We haven’t gotten far, still at the place we are picking up the flowers and all. Theo is only able to play two hours every other Saturday night, so it will be slow going. But we are really hopeful that he is able to extend the time a bit more to three or even four hours instead of only two. We are just glad he can be involved at all. We missed him and frankly he is just the sweetest, most awkward guy. He is doing a great job as an inexperienced DM and I am looking forward to seeing how he mixes things up!

On my transition, it’s ongoing… That is all there is. I’m in a good place and I feel comfortable in my own skin a lot of the time now which is better than the NONE before this. I go through gender dysphoria episodes, it’s going to happen but I try not to dwell. Instead, I try to look at the drastic reduction in those episodes. Also, I am currently participating in a study by Transaccess which may help others understand the barriers transgender people face when trying to access healthcare. If you are transgender and want to participate, click the link. I’ve gone through part of the process and so far it’s been very easy even with the advent of the social distancing and all. They are doing remote interviews through Zoom at the moment. I have my second, and I believe, final interview on Friday. They are very nice, very attentive to the issues surrounding transgender people and are very accomodating. You get a $50 Amazon or Walmart card for your troubles, but more importantly you provide anonymous data that can help all transgender people in accessing healthcare in the future.

Something to think about. Words matter, let’s try to be understanding.
Snow. Snow. Lightly snowed all night.
Snow day, warm fire.
Went out to shovel snow and check on the chickens. Snow shoveled, chickens are warm and happy in the barn.
Love my bright fuchsia hair!