In my world, that of a transwoman, coming out means there are allies and opposition. I admit, I had not expected a third party to arise, those that tune out completely. Blinders are put in place and they will not accept new information, or acknowledge it. I spoke to my youngest brother, Paul today, and we had what amounted to a decent conversation. Perhaps he is trying to spare my feelings about how he really feels or perhaps he is really that indifferent. I know, it sounds like indifferent would be a great way to go, just a life as usual situation. However, Paul was the little brother that followed me around, who thought I was much cooler than I ever was. As we grew up, he became aware of my faults and found his own way. Now, the older brother he thought he had is his older sister. For him this is a new thing, perhaps he believes I was somehow lying to him or tricking him. It’s a reaction I have been waiting for, that erroneous thought that who I am is somehow a sleight of hand.

I haven’t heard from Scott yet. I sent him an email about my coming out several weeks ago. I know that not everyone checks emails regularly like I do, but that doesn’t stop me from wondering. I would like this all over, good or bad. I accept he may need time to process, or he may never respond to me at all. In any case, I’ve done all I can, it will be up to Scott to decide his own actions.

I got my hair cut a couple of days ago, it was getting just a bit rough and I decided to get it cut short again. Before I went to Great Cuts (yes, I know), I was working at my desk which is rare and one of my female coworkers walked by and said you should let your hair grow out. Normally, I would think she was just making an offhand comment, but she had noticed a few weeks ago that my nails had clear lacquer on them and commented on the length. She wasn’t commenting in a judgmental way, but more in a surprised way. I think that she is noticing the subtle signs and the hair comment was an addition to that. Her comment made me think though, why do I keep getting my hair cut short? Mostly, it’s because I’m still behind that mask for work and to alter it would be to disrupt the illusion. But also, because my hair gets very hard to maintain before it gets to mid-length and I look very ragged. It takes forever to get out of that ragged area and into longer hair, which I used to have about 15 years ago.

I have decided, however, to finally let my hair grow out. So, I received a haircut this final time and from now on it will be only shallow trims to just keep the raggedness at a minimum. I love my wig, well I love the look of it and while I realize that it will not look that way because my hair is different, I really want the length and color. I loved my hair long before, but I could never give a reason not to get it cut to a “professional” men’s length without giving away who I really am. So, at the urging of my manager one day, I cut it off to put forward a more professional male persona as I was trying to get a better position. I regretted it the moment I did it, and I felt a traitor to myself. And into the darkness of my mask I sank, while going through a divorce and custody battle. It wasn’t the best time for me, and despite being through a war, this time in my life was far worse.

I find myself wondering if anyone has tried small-stepping into transition at work. One little piece at a time, and then eventually one day they would realize you are in full girl mode, but by then it would be too uncomfortable for them to broach the subject. I am sure that this will not be the case, but one can hope to just slide into the transition with minimum issue. Yes, sometimes I live in a fantasy land, complete with unicorns and fatty foods that make you lose weight. 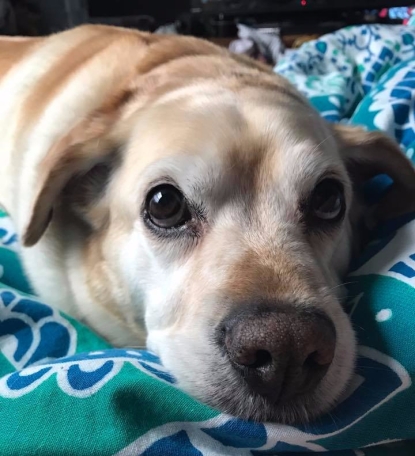 Our dog, Mabel, who has been our loving and stalwart companion died on Wednesday. She was 15 years old, based on the veterinarian’s guess. She was a stray that my wife’s sister had found, then we claimed her. She was afraid of people and ceiling fans. She lived 8 wonderful, happy, ceiling fan free years with us. Mabel loved to tear apart plushy toys, but only the ones that were hers. She loved barking at cyclists going down our street and at people insane enough to ring our doorbell. Mabel was kind and loving, never biting in anger and showed extreme patience with our children. I didn’t see her go, my wife and son were there for her. I wish I had been there, though it would have torn my heart to see her go. One last ear scratch, one last kiss on her head. I don’t know by what criteria dogs are allowed into a peaceful, sunny field with plenty of bunnies to chase and all the bacon treats and belly rubs a puppy could want, but I know Mabel should get that. Mabel was a good dog.

Snow day, warm fire.
Went out to shovel snow and check on the chickens. Snow shoveled, chickens are warm and happy in the barn.
Love my bright fuchsia hair!
Lulah is taking her Yule eve nap. I’m sitting here missing my parents but knowing I’m so lucky for the family still here.
Rose colored my hair last night. It’s lavender but looks silvery. I’m not unhappy about it! Ignore my blotchy face pls.
Taken from Willow. Willow your shares are off 😁